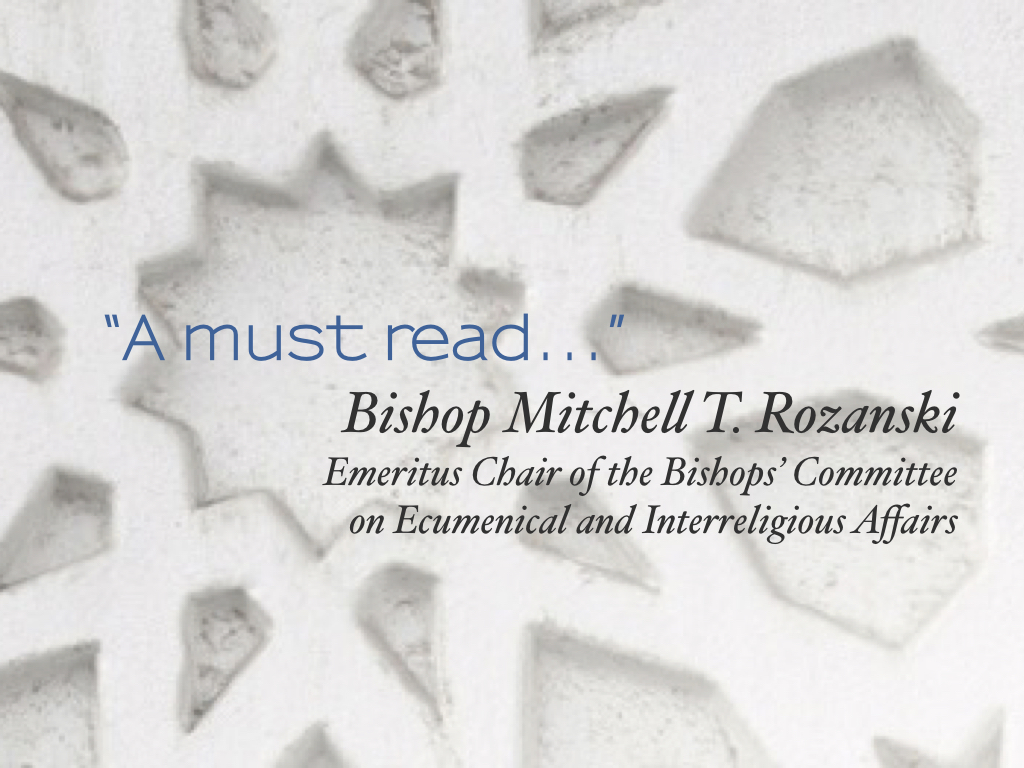 SECOND PLACE: ‘GENERAL INTEREST’ CATHOLIC BOOK: Finding Jesus among Muslims won a Second Place award in the ‘General Interest’ category of the 2018 ‘Excellence in Publishing Awards’ held by the Association of Catholic Publishers.

The book received the following designations from the Catholic Church:

“In a time of political division and fear, Jordan Denari Duffner offers us a refreshing work of love, compassion and understanding.”

“This book is … a must read by all who take seriously the need for dialogue and understanding, particularly between Muslims and Catholics.”

“This is an exceptional introduction to interfaith engagement between Catholic Christians and Muslims.”

“This is an elevating and personal read that challenges each of us to look deeper into others in order to learn more about ourselves.”

“Finding Jesus among Muslims is a beautifully written and honest testimony to the value and power of interreligious learning, grounded in Jordan Denari Duffner’s own life experience, reflection, and prayer.”

“Read this book. Then put it down and do something about it.”

“Prepare yourself, this book will create more questions than it does answers — but it’s time for this conversation to be had, for it is now the reality of our world.”

For the full-length versions of these reviews,
click here.

Reviewed in Englewood Review of Books

“Divided into three parts, the book challenges us to explore the interpersonal, theological, and transformative facets of Christian-Muslim dialogue. Although Duffner writes from a Catholic perspective, the wisdom she offers here is similarly relevant for Protestants.” – C. Christopher Smith in Englewood Review of Books

“Jordan Denari Duffner’s beautifully written and deeply felt [book]… is a timely and important book that offers a quiet but forceful rebuttal to the current demonization of Muslims.” – Rachelle Linner in January 2019 for Catholic News Service

The review was picked up and published by the Catholic Standard, Boston Pilot, and Catholic Phillty, the archdiocesan newspapers for Washington, DC, Boston, and Philadelphia, respectively.

Reviewed in the Washington Report on Middle East Affairs

“The work is as informative as it is personal. While unfailingly sensitive and gracious, Finding Jesus Among Muslims is not sanitized. Duffner writes honestly and does not merely brush under the rug uncomfortable aspects of her journey over the years. She reveals thoughts and experiences that many would be reluctant to reveal, particularly in settings as emotionally combustible and susceptible to provoking offense as faith and religious differences.”  – Amin Gharad in the October 2018 issue of WRMEA

In an August 2018 issue of National Catholic Reporter, Robert Shine reviewed the book, drawing particular attention to the way reading the book helped him uncover and challenge his latent, implicit biases towards Muslims. He wrote: “It is precisely because these biases are so ingrained and because Islamophobia is on the rise that Finding Jesus among Muslims is such an important and timely resource.”

From reader on GoodReads

“This is a scholarly and yet intensely personal book written by a cradle Catholic who drifted away from the church in her teens and came back to it while at university, largely as a result of her interaction with Muslim students. To my surprise, it gave me almost as many insights into the Church of Rome (which I thought I already knew quite a lot about) as into Islam.” – Judith Ford on Good Reads

In a 2018 issue of Catholic Library World, Daniel Boice reviewed the book, writing in part: “As a guide for Catholics, her credentials couldn’t be much better. … Best of all are her stories of how the prayers of her friends and her study of the Qur’an have deepened her own faith. Excellent study questions make this a valuable book for church libraries. …Warmly recommended for parish and academic libraries.”

Reviewed in Living City, Magazine of the Focolare Movement

In the April 2018 issue, Margaret Kelly reviewed the book, writing: “Very helpful is Duffner’s exploration of the parallels between Islamophobia and anti-Catholicism…” and “Particularly edifying is the author’s ability to convey her personal experience without hiding the ‘implicit bias’ that she has worked to overcome…”

Recommended by the Paulist Ecumenical and Interfaith Relations Office

Listed as a recommended resource in a quarterly journal of the Paulist Fathers of the U.S. and Canada.

“A Christian guide to learning about Islam,”

by Elizabeth Lefebvre in US Catholic | February 2018

“Finding Jesus Among Muslims couldn’t have come at a better time. While Jordan Denari Duffner’s book would be a welcome resource for interreligious dialogue at any point, it resonates even more in our current timeline of Muslim travel bans and Senate candidates who have said that Muslims shouldn’t be allowed to hold public office.”

Read more reviews from readers on Amazon or GoodReads.